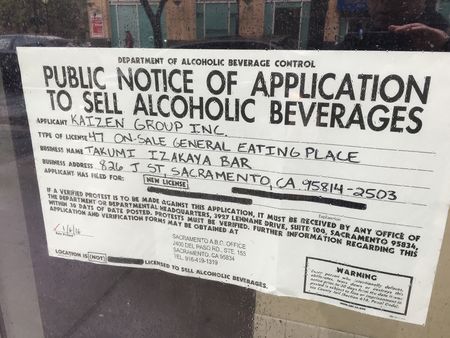 Takumi Izakaya Bar will replace Sushi Paradiso at 826 J Street, according to a notice posted on Wednesday.

Based on shared names and addresses in Takumi Izakaya's liquor license application and filings with the Secretary of State, it appears that the new restaurant will share ownership with the popular Bonzai Sushi, located in Sacramento's Pocket neighborhood.

There's not much else out there about the restaurant at this point, but I'll keep you updated. A true izakaya (an informal Japanese drinking establishment that serves food to accompany the drinks, per Wikipedia) would be a great addition to the neighborhood near the arena.

Tea-riffic: Panna cotta, Kru - One of the most memorable bites was the green tea panna cotta served with a bit of fresh mandarin. Elegant. Sweet. Seasonal. Garrett McCord in Sac News & Review.

Feast Q&A: Sacramento sports bar Joe Marty’s cleats up for a new century - The classic neon “sculpture” says “Joe Marty’s,” complemented by a big new banner proclaiming, “Back in the game.” Both signs perch above the 2.0 version of Joe Marty’s sports bar, with its polished concrete floors, industrial lighting, eight big-screen TVs and a museum’s worth of vintage photos and baseball memorabilia. It’s an homage to Sacramento baseball. Allen Pierleoni in the Sac Bee.

Dunkin' Donuts planning third location in Sacramento region - Two new drive-through restaurants, Dunkin’ Donuts and Taco Bell, are proposed for south Sacramento. According to the application filed with the city, each restaurant would be about 2,300 to 2,500 square feet, on what is now empty land at 7310 W. Stockton Blvd. Ben van der Meer in Sac Biz Journal.

Peach - This organic, vegetarian breakfast and lunch spot is scheduled to open mid-January in Historic Folsom, replacing The Black Rooster Café, which closed in November. Chef Cillian Spain, a prep chef at Karen’s Bakery and Café who owns the new eatery with his wife, Sue. In Sactown Magazine. (Third item.)

Tinder for Food - What can’t you do with an app these days? Three app-based companies new to Sacramento deliver restaurant food right to your front door. Here’s a look at what each company offers. Featuring Postmates, Caviar and FoodJets. Jordan Venema in Sac Mag.

New future for former restaurant site in Carmichael - A distinctive red building that once housed an Indian restaurant in Carmichael is being reinvented as a Mexican eatery. Rey Azteca will replace Taj Bar & Grill at 6400 Fair Oaks Blvd. A public notice displayed at the restaurant, which is closed, confirms the change of ownership. Sonya Sorich in Sac Biz Journal.

Eatery Slated for Old Mimi’s Cafe in Natomas - A new, sit-down eatery is already slated to go into the former’s Mimi’s Cafe location in Natomas. Signs posted on the the 3511 North Freeway Boulevard property tout the coming of a new Casa Ramos Mexican Restaurant. In The Natomas Buzz.

VIDEO: Barwest’s Community Table - Barwest, at 2724 J St., recently completed a complete remodel and revamped its menu. It also established what owner Trevor Shults is calling a "community table" -- a designated booth at the back of the restaurant with an unusual feature. All profits from meals ordered at that table go to a designated charities like Shriners Hospital and Big Brothers Big Sisters, changing each month, over the next year. Bethany Crouch on FOX 40.