With Magpie Cafe's move to a new and larger space over the summer, is it still as good? Sac Bee dining critic Carla Meyer gives her two cents:

Magpie visits revealed remarkably high consistency in food quality and comfortable places to sit in a space I initially found too austere...

One can and should order the excellent burger, which is new to this location and already has evolved since the summer. The first burger was bigger, had cheese and was becoming too unwieldy to make for a place that’s not a dedicated burger joint, Roehr said. Diners often wanted to customize, creating 10 different experiences for every 10 burgers.

Magpie now offers one burger experience, which involves a house-baked brioche bun with a dark patch atop it courtesy of a grill flipover. The Niman chuck patty is cooked just past medium, so the salt and char tastes come through prominently. Brightened by mustard aioli and house dill and bread and butter pickles, and then peppered by arugula, this burger’s missing nothing, even with no cheese.

I've had several meals in their new space - including the aforementioned burger at a recent lunch - and all of my experiences have been delightful. 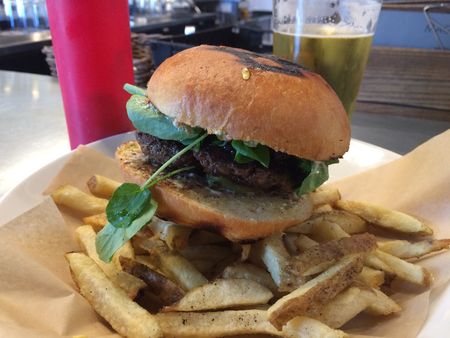 Magpie Cafe is located at 1601 16th Street, and can be found online at http://www.magpiecafe.com/.

‘Culinary concourse’ proposed for downtown Sacramento - Downtown Sacramento’s historic D.O. Mills Bank Building could become a farm-to-fork showplace featuring a dozen high-end eating spots under plans being floated by the owners of the ornate, century-old building...The idea is to replicate the feel of San Francisco’s Ferry Building or the Oxbow Public Market in Napa, where multiple restaurants and related businesses operate synergistically in the same space, said Valerie Mamone-Werder, business development manager with the Downtown Sacramento Partnership. Bob Shallit in the Sac Bee.

Eat ’n’ drink: The local look ahead - The Food World is chatting with speculation: What trends will heat up and take off in the new year? Could there be another pastry as trendy as the Cronut? Will a fresh new cocktail push the shrub off the bar? Is there a step up from sous vide cooking? We asked a well-informed Kurt Spataro, Chris Tucker and Whitney Johnson for their 2016 forecasts for Sacramento. Allen Pierleoni in the Sac Bee.

Hidden Breakfast Gem: Harry’s Cafe - Harry’s Café serves Chinese, Vietnamese, and American food, all of which is a reflection of owner Harry Luong – a Chinese man who grew up in Vietnam and moved to the United States in search of the American Dream. While the lunch and dinner options are good (try the oxtail stew), it’s the breakfast options that keep me coming back. Tony Cervo in Sac Press.

Umai Savory Hot Dogs - This Roseville Asian fusion hot dog restaurant is expanding to Natomas with a new location slated to open in February. What originally began in San Jose in 1992 with his father Loi’s cart, has grown into owner Louie Tran’s passion for crafting 27 gourmet hot dog selections on buns that are baked fresh daily. Anna Petkovich and Johanna Puch in Sactown Mag. (Third item.)

All Bacon Everything! Fifth Annual Sacramento Bacon Fest returns! - Now in its fifth artery-clogging year, the annual Bacon Fest is back. Just when you thought you’d gotten a handle on your diet, the festival’s curators threw a curve ball of epic proportions your way. This year’s festivities include nearly 100 restaurants, bars, cafes, coffeehouses, gelato spots, supermarkets and anywhere else that’ll serve their salt-laden purpose. Eddie Jorgensen in Submerge Mag.

VIDEO: Mochi Madness - This morning Nha is at the Buddhist Church of Florin where the Florin Japanese American Citizens League is preparing the mochi, a process that takes hours to cook before it is ready. Nha Nguyen on Good Day Sac.

VIDEO: Juice It Up - A new year means a new you! Looking to get and stay healthy in 2016, why not start with juicing. Juice it up is a juice bar that offers fresh squeezed and raw fruit juices. Heather Brent on Good Day Sac.

VIDEO: Auto Museum Beer Prom on March 4 - The California Auto Museum is getting ready to throw a party and it’s only for adults! Nha Nguyen on Good Day Sac.