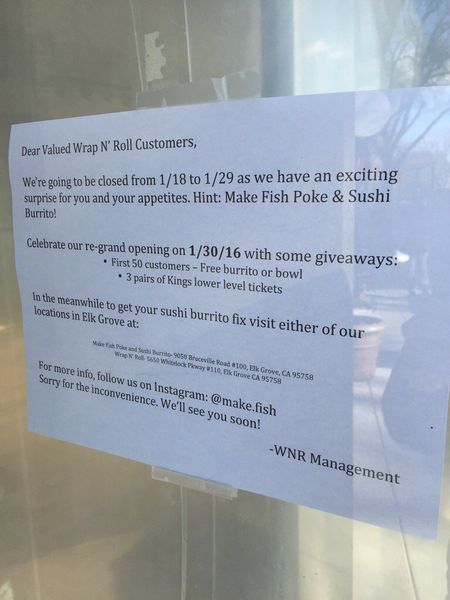 Wrap N' Roll Sushi Burrito closed on Sunday, January 17 and will reopen on Saturday, Jan. 30 as Make Fish Poke & Sushi Burrito, according to a sign on the door sent by a Cowtown Eats tipster.

According to their Facebook page, you can have poke as a burrito, bowl, nachos or salad. They also sell snacks from $2 for spam musubi to pork belly asada fries for more than $8.

Just three days ago, Eater.com ran an article asking if poke might be the next fast casual trend. Given the fact that a restaurant changed from the quasi-trendy sushi burrity to the very trendy poke, the answer is probably yes.

I ate at the old Wrap N' Roll several times and always enjoyed myself, but found it to be too much food at times. I look forward to giving their new poke forward restaurant a try.

When it opens on Saturday, Make Fisk Poke & Sushi Burrito will be located at 1801 L Street and can be found online at http://www.makefish.com/.

Shoki Ramen House - After its original location on 24th St. closed its doors at the end of 2014, a new outpost of Shoki is slated to open at the end of January at 21st and Broadway in the building that formerly housed Trails Restaurant...The new Shoki will also offer a specialty beer created by Ruhstaller Brewery exclusively for the ramen house’s new outpost. Anna Petkovich and Johanna Puch in Sactown Mag. (Second item.)

Beer Run: Auburn Alehouse takes quality to next level - In 2012, Auburn Alehouse won a gold medal at the Great American Beer Festival for its Gold Country Pilsner, an incredible achievement in a very challenging category at what is arguably the most important beer event in the country. The brewery has also won two bronze GABF medals for this beer, in 2010 and ’13. So, what did owner/brewmaster Brian Ford do for an encore? In 2014, he spent $20,000 on lab equipment, including a dissolved oxygen meter and pH meter, in an effort to dial in his brewing procedures and take his entire lineup of beers to new heights. The focus is on quality and freshness, including a “best by” date stamped on the bottle that lets consumers know time is of the essence if they want to enjoy that same pub-quality freshness at home. Blair Anthony Robertson in the Sac Bee.

Cure for what ales you: Behind-the-scene challenges of opening Midtown Sacramento’s newest brewery - Larissa Meltz and Alex Larrabee sit around a conference table in a darkened office on L Street. It’s hard to believe this space will transform into Midtown’s newest craft brewery in a little under four months—if everything goes to plan. Engaged for over a year, Meltz and Larrabee need Big Stump Brewing Co. to open for sure by May 22 to host their wedding reception. But launching a brewery on the grid has proven tougher than expected. Graham Womack in Sac News & Review.

On the right track: Gina’s Filipino Kape - Lumpia are possibly the most well-known Filipino dish. The ones at Gina’s are long and slender, freshly fried and served with a sweet and slightly spicy dipping sauce. The pork filling isn’t plentiful, but they’re tasty nonetheless. You can also get them with a shrimp filling. They’re on the right track, introducing Filipino food to downtown, but Gina’s could use some more oomph. Some enthusiastic promotion of the menu items and what they are, plus some fine-tuning of flavors could really make it a go-to spot on the grid. Ann Martin Rolke in Sac News & Review.

Sushi restaurant closer to opening in former Sammy Hagar space - Significantly increasing the size of your restaurant can be both a blessing and a challenge — just ask Steve Kwon. He owns Ninja Sushi & Teriyaki, which is relocating within the city of Roseville. It's moving from 963 Pleasant Grove Blvd. to 238 Vernon St., a downtown Roseville space previously occupied by ill-fated Sammy Hagar restaurants. The new dining space is about five times the size of what's available at the sushi restaurant's current location. Sonya Sorich in Sac Biz Journal.

Sacramento Bacon Fest returns with sizzling eats and events - Sacramento Bacon Fest is back for its fifth year, and promises to churn out lip-smacking, carnivorous creations from Jan. 25-30. The week-long festival has grown considerably since co-founders Brian Guido and Nick Miller launched it in 2011 as a three-day weekend event with 20 participating restaurants. This year’s roster involves nearly 100. Anna Petkovich in Sactown Mag.

VIDEO: Baconfest! - Ed Roehr from Magpie shows some samples of what the restaurant is offering during the week long Baconfest. Amy Carraba on ABC 10.

VIDEO: Dishin' With Tina: Folsom's Piggyback Ribs - Tina is checking out a tasty restaurant where they serve delicious ribs. On Good Day Sac.

VIDEO: Wedgie Burger - Red Robin has introduced the Wedgie Burger, it’s a low-carb, 450 calorie limited-time offering stacked with bacon, guacamole, tomato and red onions on top of a beef patty all inside of a lettuce wedge bun. On Good Day Sac.

The Shoki @ Trails opening is the slowest pedal in history. What is going on?!