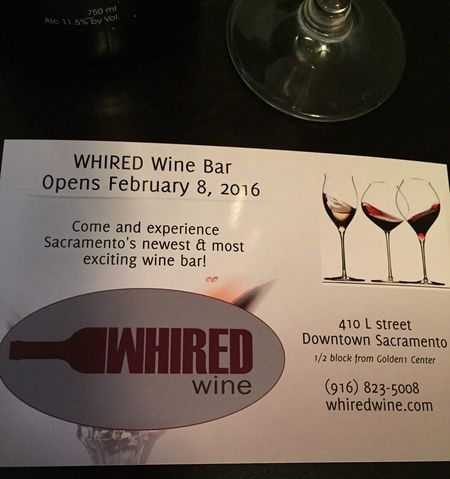 Whired Wine whose name is a combination of both WHIte and RED wines, is scheduled to open on Feb. 8, it announced on Facebook late last week.
Sactown Magazine's Tori Masucci Cummins fills in some of the details:

San Francisco restaurateur John Marco and his wife Vicky transformed the intimate space, a former jewelry store, into a wine bar with a modern, industrial vibe and chic details like a central chandelier and colorful paintings by local artists such as Rafael Delgado, and a moniker that combines “white” and “red...”

To that end, Whired Wine will be serving up local craft beers, selections of sake and a small plates menu that includes a panini with brie, pear and prosciutto, or a cheese and charcuterie board with choices like Tartufo salami and Point Reyes Farmstead cheese. Chef Cecil Rhodes, who runs Cecil's Taste Food Truck and formerly served as head chef at Bella Bru in Carmichael, will helm the kitchen.

2016 will be a very busy year for the blocks adjacent to the arena. I expect many, many other restaurants to open by the time the Kings play their first game at the Golden One Center this Fall.

Whired Wine is located at 410 L Street, and can be found online at http://www.whiredwine.com/.

Confidential: Secret menu, Mother - “You should order our kimchi fries.” This is what chef Matt Masera at Mother tells me. Sure. But they’re not on the menu. “They’re on the secret menu.” Nick Miller in Sac News & Review.

Police: Man Denied Sandwich at Subway Returns to Assault Employees, Smash Window - Sacramento Police say a man who was denied service at a Subway restaurant returned moments later with some friends to smash a window and attack its employees. According to officers, the man was denied service when trying to buy a sandwich at the Del Paso Boulevard and El Camino Avenue store Sunday evening. He returned a short time later with several other people. Ian McDonald on FOX 40.

Happy Hour Hound: Duke's Plates and Pints - Located on La Sierra Drive, near Watt Avenue and Fair Oaks Boulevard, Duke’s Plates and Pints is ready to cater to any football fan, hungry patron or happy hour hound. Duke’s is a casual bar that is small enough for you to grab a quick bite by yourself but big enough to meet with your crew on game day. Amy Serna in Submerge Mag.

The New Meat in Town: V. Miller Meats in East Sacramento won’t let anything go to waste - Walking into V. Miller Meats in East Sacramento is not unlike stepping back in time. The clean white walls and cuts of meat showcased behind spotless glass cases recall a time before hamburger to go became a normal thing, and imposing walls of bloodied styrofoam plates dominated the meat section of the local grocery. Robin Epley in Comstocks Mag.

More chain restaurants coming to Placer County - Not everything is made with local produce and served with a side of quinoa. Despite the area's interest in locally owned eateries, chain restaurants are still opening new locations in the region. That's especially evident in Placer County, where these four chain eateries are in the works. Featuring In-N-Out, Moe's Southwest Grill, Chick-fil-A and Panera Bread. Sonya Sorich in Sac Biz Journal.

Bakery closes store in region - About a year after entering the region, SusieCakes has closed its only Sacramento-area location. A sign displayed at the store in the Pavilions shopping center on Wednesday confirmed the closure. Sonya Sorich in Sac Biz Journal.

VIDEO: Barwest Give Back - Cambi is at Barwest checking out how they are making a difference and giving back! On Good Day Sac.

VIDEO: Beer and Cheese Pairings - Steve Tatterson -- The Beer Guy/Owner -- and Sara Arbabian -- Cheesemonger/Owner -- from The Rind are in the studio with Bethany sharing their expertise in beer and cheese. Betany Crouch on FOX 40.