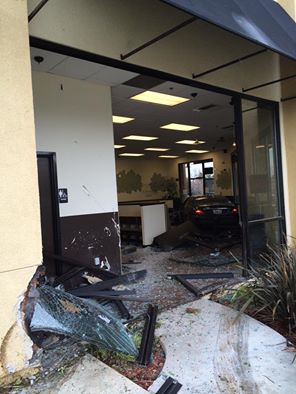 Just weeks after closing its midtown location to fine tune its concept, Wrap N' Roll Sushi Burrito was forced to close its Elk Grove location after a black Mercedes-Benz with a surprisingly courteous driver crashed through its doors on Thursday afternoon. The Sac Bee has more:

Police said they received a report of shots fired in the area, and the vehicle’s occupants fled the area following the crash.

The vehicle ended up inside the Wrap ’N Roll Sushi Burrito restaurant, but no one was injured. The only customer in the restaurant was at the counter, not in the dining area affected by the crash.

After crashing into the restaurant, three passengers exited the vehicle. The driver apologized to the cashier and all three of them quickly departed before police arrived. Police also say they found one bullet hole in the vehicle.

Read the entire story in the Sac Bee and watch a great video of a tow truck pulling the car out of the building.

After an unfortunate incident took place this afternoon, wrap n roll Elk Grove will be closed until further notice. We're just grateful that everyone made it out okay.

In the meanwhile, for those seeking sushi burrito fixes please visit any of our other two locations Make Fish Poke & Sushi Burrito -9015 bruceville road #100 or our midtown location- 1801 L street #70 to be reopened this Saturday post renovations. We sincerely apologize for any inconvenience!

I'm glad nobody was hurt and hope the business recovers quickly.

Beer Run: Burned out on beer fests? Take it up a notch with Art of Beer - If you’re one of those craft beer fans who’s burned out on beer festivals in the Sacramento area – too many tiny plastic souvenir cups, too many long lines for beers you’ve already seen all over town – maybe what you really need is something a bit more focused. That’s where the Art of Beer Invitational on Friday, Jan. 29, fills a void. It targets the aficionado. Blair Anthony Robertson in the Sac Bee.

VIDEO: Bravo's Soup & Sandwich - This morning Cambi is at one Elk Grove hot spot that uses produce right from Elk Grove. All soups are made from scratch from in-house meats, vegetables, pastas, and soup stocks. On Good Day Sac.

VIDEO: Dos Coyotes 25 Foot Burrito For 25 Years - Dos Coyotes is celebrating their 25th anniversary with a 25 foot burrito fundraiser and we are checking it out! Lori Wallace on Good Day Sac Part 1 | Part 2.