BarWest, which many people call BroWest for the crowd the bar attracts, is in another battle with the neighborhood, this time over an entertainment permit.

Before opening in Midtown in summer 2011, BarWest's owners told neighbors and the press that they wouldn't seek an entertainment permit from the city.

Not quite two years later, the bar/restaurant that took the place of Aura on J Street is doing exactly that, inciting the wrath of neighbors who say BarWest isn't holding to its original agreement.

"Needless to say, I'm incredibly disappointed that they have gone back on their word," said Julie Murphy, co-chair of the Marshall School/New Era Park Neighborhood Association. "And we have grave concerns about how an entertainment permit will affect the ecosystem on that block."

I understand the owner's desire to find a way to get more business. I was in there on Monday for an after work drink, and there were fewer than 5 people total in the entire restaurant.

Mahoroba Japanese Bakery - After seeing their ads in the Sacramento News & Review and driving by a million times, I finally stopped in to check out Mahoroba. For waiting this long, I'm a fool! Whoever created their recipes must have sold his or her soul to the devil, because the product here is unbelievable.  Doughs are phenomenally soft, fillings are light, airy and not too sweet, and the marrying of the two is simply perfection.  No sweet tooth today?  Pick up a savory bun with hot dogs or dim sum  baked right in.  That's right, I said dim sum, people! Stacy Barawed on The Fun Junkie.

Staff pick: Uncle Vito's Slice of NY - There is nothing not to love about pizza; It tastes good hot or cold, for breakfast or dinner, or to satisfy drunk munchies. My mouth waters at the thought of that first bite of cheesy, greasy pie-shaped dough. Uncle Vito’s Slice of N.Y. is a small pizza joint on 1501 16th St. in midtown Sacramento connected to the restaurant Pronto. After hearing good things about this “slice of New York,” as they advertise it, I decided to give it a whirl. Anna Puccinelli in the Sac State Hornet.

Save $5 at Sutter District Restaurants This Month 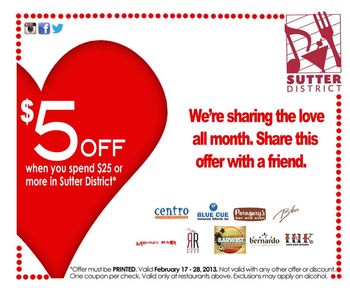 The Sutter District, the area surrounding Sutter's Fort in midtown, includes so many great resturants, including:

Through the end of Feb, save $5 when you spend $25 or more. Not valid with other offers.

Click here to get the coupon. Make sure you print it out and bring it with you.

The 15 most popular Sacramento happy hours of July 2012 on CowtownEats.com were:

Thanks for visiting Cowtown Eats! We had more than 52,750 page views (up 48 percent compared to last year) and more than 16,400 unique visitors (plus 106 percent over last year).

Daily Dining News: Is Barwest to Blame for Noise, Fights?

Some Midtown residents are blaming Barwest for what they say is a surge in noise and fights since Bar West opened a year ago. Bar West patrons say that if they don't want to put up with it, neighbors should move to Natomas. Video from CBS 13.

Harry's Cafe a fine deal for Vietnamese, Chinese and American fare - When you see a menu offering both Chinese and Vietnamese food, experience probably tells you to be wary, that the quality of the cooking is apt to be watered down for the sake of expediency. That's a reasonable conclusion to draw – except in this case. Harry's Cafe is the real deal because the food is a reflection of everything Harry Luong is all about. He's an American immigrant success story through and through, modest and unsung as he may be. Blair Anthony Robertson in the Sac Bee.

Feeding Crane Farms poised to launch product line, acquire commercial kitchen - If you follow the local food scene, you're probably already familiar with Feeding Crane Farms, a new boutique organic farm in within the city limits (in Natomas) that focuses on growing for local restaurants. The small urban farm has big plans. I recently caught up with Mike Ward to learn more. Ward, you may recall, was the talented chef de cuisine at Lounge on 20 where he was best known for his amazing charcuterie plates. When the restaurant went under, he quickly landed a job at Feeding Crane Farms in a newly created position - culinary development manager. That was back in May. Since then, Ward has been very busy - working, planning, dreaming. Blair Anthony Robertson in the Sac Bee. 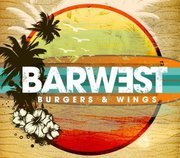