Dining News: Jackrabbit Brewing to Open in West Sac in the Fall 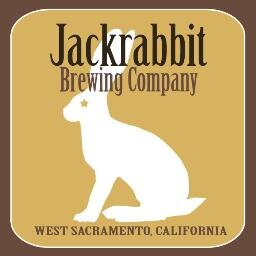 In the coming months, Jackrabbit will expand from 1,500 to 4,500 square feet with a public taproom that would be open on the weekends, a front patio and bar area. Launched in 2011, Jackrabbit is currently a production-only brewery that operates out of its location in a West Sacramento business park down the road from Yolo Brewing Company and Bike Dog Brewing Co.

Jackrabbit plans a pre-construction kickoff party scheduled for sometime in late July that will give patrons an opportunity to view the brewery space before demolition, sample free beer and sign up for an exclusive growler club.

The opening of Jackrabbit Brewing's Taphouse will be the third stop in what some are calling the Port Brewing District, with the first two being Bike Dog Brewing and the recently-opened Yolo Brewing Company.

Jackrabbit Brewing can be found at 1315 Terminal St. in West Sac, or online at http://www.jackrabbitbrewingcompany.com/.

2 Sacramento-area restaurants land spots on OpenTable’s list of 100 top neighborhood gems - Customer reviews lifted Taylor’s Kitchen in Sacramento and The Chef’s Table in Rocklin to spots on OpenTable’s list of the Top 100 Neighborhood Gem Restaurants in America. “Some of our great customers must have mentioned something nice about us,” said co-owner Kathy Johnson. “We’re in the middle of a lot of neighborhoods, and a lot of them like to claim us.” Cathie Anderson in the Sac Bee.

Thai Canteen makes it through critical year in midtown - Midtown can be a tough place to open a new restaurant, especially if there are several others nearby of the same genre. Many restaurants never even make it through their first year. I'm happy to report that Thai Canteen on 16th Street just celebrated its one-year anniversary on May 28. Tee Devahasdin is relieved to have made it. “It's been a challenge; I was nervous to open in midtown,” he confesses. Devahasdin, his sister Bua and her partner Deo Suwan own the Thai Canteen in Sacramento and another one in Davis which opened in November of 2010. Bua and Deo now run the Davis store, and Tee is in charge of the one in midtown. He even moved into the apartment building above it, eliminating any commute. Andrea Thompson in Sac Biz Journal.

Sacramento International Airport to get six new restaurants, with an emphasis on local fare - Under the 10-year, $80 million contract, SSP will bring Peet’s Coffee to Terminal A, along with three local spots: burger joint Squeeze Inn, Italian restaurant Paesanos and comfort food purveyor Cafeteria 15L, which already has a restaurant in Terminal B. Isabelle Taft in the Sac Bee. 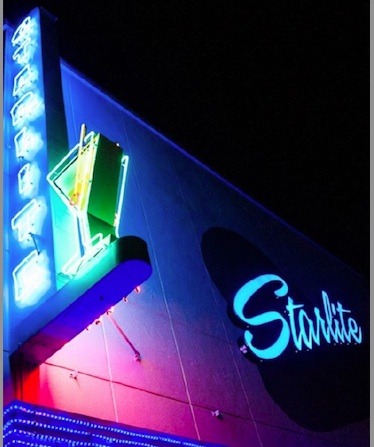 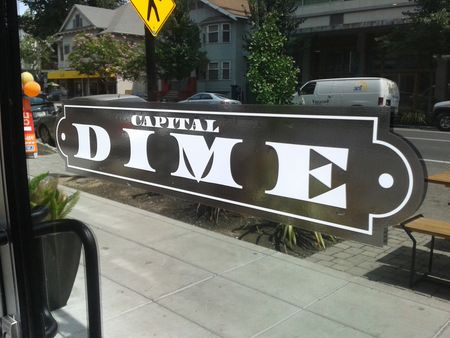 This is what Robertson wrote in the Sac Bee on April 20:

But we began to wonder if Moore was as attentive as he needed to be, as we encountered many inconsistencies and outright cooking miscues – overdressed salads, under-seasoned chicken and improperly cooked waffles. Over three recent visits, the food ranged from mediocre to disappointing...

The poutine – yes, everyone’s doing a version of French fries, gravy and cheese these day – was one of the worst dishes I can remember eating. The fries were bland. The gravy was lukewarm. The mozzarella was cold, and so was the braised veal. The whole thing was awash in soggy saltiness. As luck would have it, I had just eaten a tremendous poutine with duck at Carpe Vino in Auburn, and Capital Dime’s was nowhere close. Is this a Dime dish? No, it’s $15.

Because the fried chicken and poutine were both miscues the first go-round, I felt obligated, given Moore’s reputation, to order them again during my next visit. Maybe it was simply an off night in the kitchen. The chicken the next time was slightly more flavorful, but the waffles remained overcooked and dense, rather than crisp and light. The poutine was identical.

I generally agree with Robertson's review. I've eaten there twice in the last month, and found much room for improvement on the service and food side. But I hold out hope that the new chef will be able to fix some of these issues as he settles in.

In the week and a half since the review ran, I've talked to a lot of people around town about the review. I've talked to people in the restaurant industry, media and frequent restaurant-goers. The one comment that everybody talked about was why the focus on a Zonca, who was no longer with Dime? Out of the nearly 1,700 words in Robertson's review, more than 600 were spent on a chef whose food and service diners who read his review would not encounter.

(Note: Another common, although not universal, comment was that Robertson should have given new chef Moore additional time to fix the kitchen. I don't agree with that. If they're taking your money, they should be willing to be judged on their food, service and experience.)

Apparently, it wasn't just the people I associate with who wondered about the extended section on Zonca. The Bee published a letter to the editor on Sunday taking Robertson to task.

When I open the paper to read a restaurant review, I expect to be directed to the establishment based on the reviewer's opinion of the food, the server and the ambiance. Opinions I sometimes ignore, often to my chagrin or delight.

Imagine my surprise to find I was treated to the reviewer's personal opinion of the past owner, Noah Zonca.

How in the world is that relevant or pertinent to driving Sacramentans or visitors to our city to this restaurant?

Read the entire Letter to the Editor in the Sac Bee.

While I agree with the portion of the letter I excerpted, the rest of the letter accuses Robertson of being biased. I don't think Robertson was biased in this case. As I said above, his experience was generally in line with the ones I had.

Catherine Enfield, aka Ms. Munchie, asked Robertson on Twitter about it. Here's their short exchange.

@ms_munchie He designed the concept. He was the front man. He created the buzz. He took it in a different direction. Then he left.

Robertson is a much better reviewer than I'll ever be. He's a better writer than I'll ever be, and he has the budget and time to eat at restaurants multiple times before writing about it. But I think he's wrong about this. Devoting more than a third of a review to a chef who isn't even with the restaurant as part of an overall negative review seems excessive to me.

Capital Dime is located at 1801 L Street, and can be found online at CapitalDime.com.

Killin It: Dan Scott - Did you enjoy any of the trillion Sacramento Beer Week events this year? If you did you have the guy above, Dan Scott, to thank. He’s very modest, so he probably wouldn’t agree with that and would point to everyone else involved, etc., but he has been MacGyvering this thing together with chewing gum and baling wire for the last five years. Becky Gruenwald in Sac Foodways.

VIDEO: Dishin' With Tina: Block Butcher And Bar - Tina Macuha is checking out a place that is taking Italian deli to another level! Welcome to Block Butcher and Bar! On Good Day Sac.

The 15 most popular Sacramento happy hours of March 2014 on CowtownEats.com were:

Thanks for visiting Cowtown Eats! We had more than 72,000 page views (up 33 percent compared to last year) and more than 21,750 unique visitors (plus 33 percent over last year).

Arthur Henry's Supper Club has been open since December, and I've found it to be a novel concept and a great place to go with friends. If they can survive as Oak Park continues to gentrify, I think they'll be very successful.

But in the mean time, they need more people to try the place out. I bought one, and if you haven't been there yet, you should too.

15 Most Popular Happy Hours of February 2014

The 15 most popular Sacramento happy hours of February 2014 on CowtownEats.com were:

Thanks for visiting Cowtown Eats! We had more than 72,000 page views (up 48 percent compared to last year) and more than 21,600 unique visitors (plus 42 percent over last year).

When Tuli closed, Chef Adam Pechal said he hoped to line up new investors and reopen at the same location soon.

If he does that, he'll be without Stan Moore, chef de cuisine at Tuli when it closed two weeks ago, reports S.T. Vanairsdale in Sactown Magazine.

Barely one week after the departure of its founding chef, Capital Dime has a new kitchen boss: Stan Moore, who was until recently a chef of Adam Pechal's Tuli Bistro, will take over for Noah Zonca at the Midtown hotspot.

Moore was a sous chef under Zonca for five years at The Kitchen, and prior to working at Tuli, he was a sous chef at Wayfare Tavern in San Francisco, as well as Enotria. He says he’s starting to gradually reshape the menu before moving on to a more significant revamp this spring.

The story also seems to imply that there was some friction between former Dime chef and partner Noah Zonca and the other owners.  “We’re a casual restaurant, so we didn’t want to bring in somebody who is exclusively focused on high-end fine dining. We wanted somebody who has the breadth of experience to do more casual food. So we’re going back to our emphasis on shared plates—our $10 plates—and more of our casual feel, because we’re a neighborhood restaurant," Capital Dime co-owner Melissa Sanchez told Sactown Mag.

While this is purely speculation, this fact combined with the fact that Zonca signed a settlement agreeing not to comment to the media would imply that there was at least a little drama involved.

California law would let gloves come off for bars and restaurants - In response to the backlash, Pan has introduced a bill that would restore the former status quo. The legislation is an urgency measure, which means it would go into effect immediately if legislators can conjure two-thirds votes. Pan hopes to push it through before the glove requirement takes full effect in June (for now, violating the rule results only in a warning). “Everyone wants to be sure people don’t get sick from eating food at a restaurant or bar,” Pan said, but “clearly what we did last year is not working appropriately.” Jeremy B. White in the Sac Bee.

Mangia in midtown - We sampled three sandwiches, liking the Hail Mary best: An Acme Bakery roll was stacked with juicy house-cured pastrami and melted Swiss, with Russian dressing and chipotle-spiked coleslaw. In second place was the Mojo Cubano, a good attempt at the real thing, which is sold everywhere as street food in Florida. Shredded pork joined ham, Swiss and jack cheeses, house-made pickles and mango-cilantro mayo on a toasted roll. The sandwich special was Middle Eastern-themed chicken shawarma with kalamata olive spread, tzatziki sauce (yogurt-cucumber), cucumber, feta cheese, onion, tomato and lettuce. It sounded good, but fell apart into a mess; not helping was the stale, dry pita bread. Allen Pierleoni in the Sac Bee.