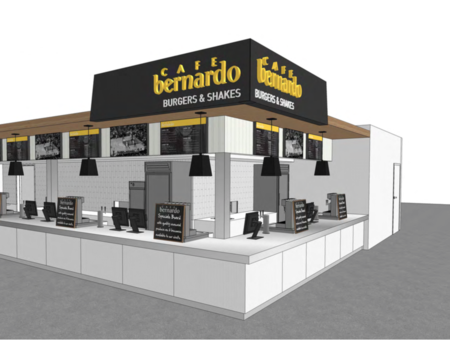 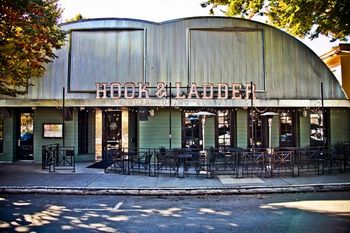 I've eaten at Hook & Ladder numerous times - including one time at the bar. But there's one detail I didn't notice, their cocktails on tap. Sactown Mag's Kate Washington explains:

That creativity and commitment to detail extends to the bar and food program, of course. Sacramento’s cocktail scene has been getting national buzz lately (as when the city was named a top destination in Imbibe magazine’s January/February issue), and Hook & Ladder’s innovations take it to even greater heights. That logo stamped into the bar, for instance, also appears in your actual drink, courtesy of a sizzling branding iron used on citrus peel garnishes. And the restaurant not only has a great selection of local and regional beers and wines on tap, it also has dedicated cocktail taps. That’s right, mixology mavens: the restaurant can literally dispense an endless stream of icy, flawless Manhattans, Negronis, and two other cocktails: the Jameson Stinger, a mint-whiskey concoction, and an original drink, the Norse by Northwest, which features crème de cacao, aquavit and a spicy West Indies spirit called St. Elizabeth Allspice Dram. Even Don Draper, who trained his child to mix the perfect cocktail, never thought of that.

Manhattans on tap may sound like a gimmick, but they’re actually the practical solution to a problem, that of turning out high-quality drinks in large quantities—fast enough so you don’t have to wait for your drink. “There are two main knocks on craft cocktails,” says Tucker. The first, he says, is that bartenders serving them can be snooty; “the other is that they take too long. We work hard to be warm and friendly, and also to expedite the drinks.” That means the bartenders will mix up anything you want—without judgment.

The longish magazine piece also discusses the design sensibility of the restaurant, the reasons the owner decided to expand beyond The Golden Bear and the thought behind the food at the restaurant.

Education is Key at Chef's Olive Mix - If you are looking for a light, healthy bite to eat while in Old Sac, you can stop by COM for some Mediterranean fare. They serve salads, hummus, olives and a premium feta. "This is THE best feta that I import directly from France," says Paskaly. She plans to expand the menu soon...Don't wait for your next guests to visit before heading to Old Sac. Chef's Olive Mix is worth the trek if you believe in getting the best quality of olive oil and balsamic vinegar. Catherine Enfield on Munchie Musings.

Mo Du Rang - Now visiting Mo Du Rang isn't going to be some transcendental dining experience but they do provide a good spread and offer up some wonderful, authentic Korean dishes for the gastronomic adventurer and for the traditionalist. Their food is definitely better than some of the other popular Korean eateries I've visited on Folsom Boulevard. Also, the service we had when we popped in there was fantastic. Ally Gaffan on A Girl & Her Fork. 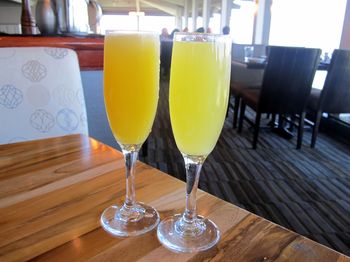 Easter Brunch is a lot like eating out on Valentine's Day and Mother's Day. Restaurants are crowded and you often have to pay extra for a prix fixe menu.

But sometimes, it just has to be done. Luckily, Sactown Mag's Tori Masucci put together a list of recommendations, including:

Old Sacramento favorite, The Firehouse, is whipping up hearty brunch selections like a Dungeness crab omelet with asparagus and roasted red bell peppers or the fennel pollen and pistachio-crusted chicken. Leave the chocolate bunnies at home and sink your teeth into the dessert menu, featuring a very grown-up, two-layer chocolate cake with apricot jam, decadent chocolate icing and apricot coulis. Plus, a separate Easter brunch kids' menu with pint-sized plates like the sweet pear-cinnamon French toast will keep little egg hunters happy. 916-442-4772.

Mama Kim Eats on Del Paso Boulevard is hosting an Easter jazz brunch with live music from house band Kumyn (fronted by Mama Kim co-owner Phillip Rayburn) and a special appearance by the Easter Bunny. The menu is jazzed up, too, with special items like a Passmore Ranch trout with heirloom beets and grilled asparagus, as well as classics like its fried chicken and waffles served with a salad of chopped apples, celery, grapes, pecans with honey mustard sauce. 916-779-1140.

Ettore’s European Bakery & Restaurant in Arden-Arcade is serving up its regular Sunday morning brunch with favorites like omelets and its signature cinnamon roll French toast, but its assortment of sugary Easter cookies, strawberry bunny cupcakes and mini meringue “nests” filled with raspberry mousse are sure to get you hopping. 916-482-0708.

If you're in midtown, if you're not eating with your parents or with kids, try Elixir. I know it sounds strange, but I've eaten there on Easter, and it was a great experience. There was no line, the food was surprisingly tremendous (go for the home fries with the mustard seeds) and it didn't cost an arm and a leg.

Josiah Humphreys reward fund to get bump from Low Brau fundraiser - While the Midtown and greater community is uniting to raise money for the Josiah Humphreys reward fund, police are chipping away at the homicide investigation. Sacramento Police Department detectives are reviewing hours of surveillance video from businesses nearby P and 18th streets, where Humphreys was beaten to death in the early hours of St. Patrick's Day, Spokesman Doug Morse said...While the police are offering a $1,000 reward for information leading to an arrest, those close to Humpreys and his family have upped the ante. A reward fund on Justice for Josiah – a website created by a close family friend – has garnered more than $8,000 in donations, and one of Midtown's newest and hippest restaurants will host a fundraiser event this weekend. To be held Saturday night at Low Brau, $1 from each draft beer purchased will go toward the reward fund, and raffle tickets will be sold for items donated by local businesses. Karen Wilkinson in Sac Press.

I'll admit that when I read that Elixir was offering a brunch deal, I was skeptical. I've only been there for beer and not food. But after reading their Yelp reviews, I'm intrigued enough to give them a shot. At half price, that is.