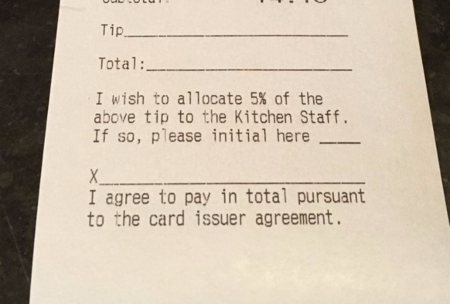 Following in the footsteps of Magpie, Ella has added a kitchen tip option to their receipts.

For those unfamiliar with the way tips are distributed, generally, only service staff can legally share in the tips. Kitchen staff is prohibited by law from getting a cut (unless servers choose to share their tips as a gift), and this leads to great pay disparities between the front of the house and back of the house staff.

Click here for a more detailed explanation of the issue.

Magpie was the first Sacramento restaurant to add a line where diners could choose to leave a tip of any amount for kitchen staff. Ella's option is similar, but the receipt asks if you want to "allocate 5% of the above tip to the Kitchen Staff." My server clarified that it meant that for every $100 in tips collected, $5 would go to the kitchen staff. This does not mean that if you leave a 20 percent tip, 5 percent goes to the kitchen, with the remaining 15 percent going to the servers.

One of the criticisims of the Magpie system is that some servers started to see less take home pay as diners started splitting the same tip percentage between service and kitchen staff. The Ella system seems to try to tackle this issue by strongly suggesting that 5 percent go to the kitchen, though I suppose one could change that 5 percent split to any number.

Selland's PR contact did not respond to a phone and e-mail request for comment and elaboration on Wednesday afternoon. My server at Ella during an afternoon visit said that the change took place at the beginning of the year.

While we're on the topic of tipping, there was a great San Francisco Chronicle article earlier this month that examined what's happened to restaurants that have tried to eliminate tipping and increase wages.

So when Sous Beurre Kitchen opened in the Mission in February, Mauschbaugh followed the example of five Bay Area restaurants that abandoned tipping in late 2014. He printed all-inclusive prices on his menu, which allowed him to pay his kitchen staff well above minimum wage and offer health insurance.

This October, though, Mauschbaugh aban-doned the tipless model and issued pay cuts. “We got overrun with taxes, and it became unsustainable,” he said.

Read the entire article in the San Francisco Chronicle.

Rum Rok - The weather may be cooling down but this newly opened Tiki bar has been heating up the downtown bar scene ever since it opened Dec. 9...Co-owner Bob Simpson hopes that the bar, which occupies a former nightclub space on the corner of H and 15th streets, will become a go-to stop for concert and theater-goers attending shows at nearby Memorial Auditorium and Wells Fargo Pavilion. In Sactown Magazine. (Fifth item.)

Soup as medicine: Aka Tonkotsu, Ryujin Ramen House - But there’s no rest for the busy, so I load up on soothing soups like the Aka Tonkotsu ($8.95) from Ryujin Ramen House. With spicy red ginger, green onions, BBQ pork and plenty of super-hot broth, it’s like medicine in a bowl. I love the semicooked egg, too, for its creamy smoothness. Ann Martin Rolke in Sac News & Review.

Bakery’s invisible expansion - Its customers may not realize it, but the popular Karen’s Bakery & Cafe in Old Folsom has practically doubled its space. After years of having its cooking and baking staff squeeze into a tiny kitchen, the business has leased a nearby building that formerly housed the Thai Siam Restaurant. Bob Shallit in the Sac Bee.

15 Most Popular Happy Hours of December 2015

Here are the 15 most popular Sacramento happy hours of December 2015 (based on page views) on Cowtown Eats:

Thanks for visiting Cowtown Eats! We had more than 48,750 page views and nearly 21,400 unique visitors.

I also want to give a special shout out to Cask & Barrel, Hook & Ladder and Ernesto's Mexican Food for generously sponsoring Cowtown Eats and keeping the lights on here.

Have a hankering for chili? Or looking for a unique activity to do while the family's in town for Easter? How about the 3rd Annual Beer & Chili Festival at Fremont Park (16th & Q) on Saturday from 1 to 5 p.m.

Each $37 ticket comes with a 5 oz beer tasting mug and a chili tasting bowl. Both beer tasting and chili sampling are unlimited.

If you're a baller, you might opt for the $67 option, which also includes a t-shirt, swag bag and early admission at noon so you can beat the crowds.

The event is a fundraiser for The Sac Artists Council.

Local breweries who will be handing out unlimited tastes include:

For more information or to get tickets, visit http://sacramentobeerandchilifestival.com/

VIDEO: Cooking with Il Fornaio - Chef Bruno Amato whips up some venison with house made blueberry preserves and soft polenta for Paul Robins and the rest of the FOX40 morning crew to sample. On FOX 40.

The recent rains and the early dusks are reminders that Fall is finally here. Looking for dishes that help you feel like the fall? Consider these suggestions from the Sac Bee's Allen Pierleoni on or near The Grid.

Check out all 16 suggestions in the Sac Bee.

A Farm at the Center of Things - It’s best known for its salad mix. But Feeding Crane Farms does a lot more than proffer pretty produce. Since breaking ground a little over a year ago, the North Natomas organic farm busily extended its tentacles into a multitude of community ventures, from starting a CSA program to partnering with local restaurants for “farm to fork” dinners. You also can find Feeding Crane’s produce— tomatoes, peppers, potatoes, beans, squash, chard, kale, broccoli and more—at farmers markets and local grocery stores, including Sacramento Natural Foods Co-op and Corti Brothers. Owner Brian Shaad and his small but determined crew aren’t stopping there. If things go right, you’ll soon see food products boasting the Feeding Crane label, too. Cathy Cassinos-Carr in Sac Mag.

Enotria and Carpe Vino make the OpenTable Top 100 wine list - When you want a special bottle of wine with dinner, which restaurants are your go-to's? OpenTable has some suggestions, sort of. The San Francisco-based online restaurant-reservation company recently released its latest Diners Choice Top 100 Restaurants With the Most Notable Wine Lists. Allen Pierleoni in the Sac Bee.

Pajo Bruich gets a lot of buzz. I've eaten his food either at the former Lounge on 20 or at receptions catered by him, and his food has never ceased to amaze me. He recently started as the chef at Enotria, and the Sac Bee's Blair Anthony Robertson is impressed.

When I visited Enotria several times a couple of years back on the heels of the restaurant's $1.5 million renovation, my impressions were alarmingly mixed. It was a pretty good restaurant but an underperforming one, with great wine, mediocre food and a hazy notion of what it could and should be. If it were to become a good restaurant, it needed to tighten its focus, elevate the menu and improve its approach to marrying wine and food.

But a great restaurant? That would require lots more skill, plenty of hard work and a 10-pound bag of pixie dust.

And yet, Enotria has done it, suddenly and with a startling degree of wisdom and sophistication. It's not only the most improved restaurant I can remember, it has come back with a vengeance as perhaps the very best fine-dining restaurant in Sacramento and beyond.

Oishii sushi restaurant/karaoke rooms now open - Oishii Sushi Bar and Grill held its grand opening Thursday, announcing it will offer half-price karaoke rooms for the first week. The restaurant, located above the Cosmopolitan Cabaret at at 1000 K St., is the third one for owner Joe Zheng, who also owns similar places in New York and San Francisco. Brandon Darnell in Sac Press.

Billy Zoellin, the chef formerly at The Golden Bear when it was featured on Food Network's Diners, Dives and Drive Ins, new restaurant is opening on May 21. Located on 21st between K and L streets, Bacon and Butter fills the space formerly occuped by short-lived mexican resturant Mezkal. Sac Press's Brandon Darnell has more:

Bacon and Butter, located in the same building as Club 21 at 1119 21st St., will serve breakfast, lunch and brunch in a space designed to make diners feel like they are in their grandmothers’ kitchens.

“The name came because I was thinking about what you do, and it’s your bread and butter,” the 28-year-old Zoellin said Tuesday. “And then I thought, ‘What’s better than bread?’ For me, the answer was bacon.”

In addition to The Golden Bear, Zoellin worked at The Kitchen and two restaurants run by local restaurateur Patrick Mulvaney.

Planned Bento Box adds to Sacramento's sushi row - Jonathan Kim, owner of the two Bento Box restaurants, is opening a new location later this year in downtown Sacramento. The location will take 5,600-square-feet at the ground floor of the office building at 1600 K St. Mark Anderson in the Sac Biz Journal.

Brunch on the horizon: One week to get ready for Mother's Day dining - Sacramento has plenty of brunch options, and we traversed the region looking for them. We focused on quality cooking, interesting and meaningful menu options, fair prices, setting with service. We ordered omelets whenever we could, for the omelet done right indicates solid technique, attention to detail and an appreciation for proper seasoning. We landed in Auburn, El Dorado Hills and Old Sacramento, midtown and downtown. We even found restaurants serving excellent but underappreciated brunch fare within minutes of Tower Café, where folks line up for 30 minutes or more to get a table for brunch. Featuring Dad's Kitchen, Sienna, Hot Italian, The Eatery, Maranello, Bistro Michel, Taylor's Kitchen, Restaurant Thir13en, Latitudes and the Delta King. Blair Anthony Robertson in the Sac Bee.

Dining review: Mostly hits, a few big misses at Grange - My first meal under Ridgeway was excellent, though I don't remember much from the farm – it was all about the sea. The salmon was a thing of beauty – thick, rich in color and "undercooked" to perfection. Crispy skin on one side gave the fish an extra textural component, yet it was cool and tender and succulent in the middle. It showed exactitude and maybe a touch of moxie. The carne asada dish that day was something special, too, showing that this chef took to heart his time cooking in New Mexico. The Southwestern flavors were intense, exciting and thorough...Grange is not amazing. The food is good and sometimes very good. The service can still range from very good to pretty good, with routine table maintenance sometimes falling short. Blair Anthony Robertson in the Sac Bee.