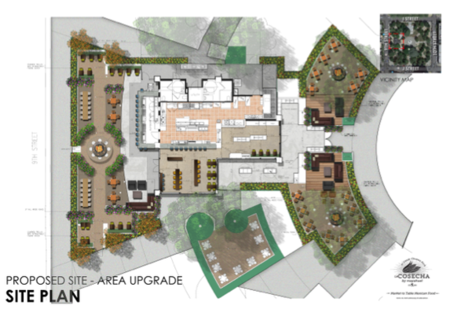 In the News That Broke Over The Holidays Department...they city council approved the way for Ernesto Delgado, the owner of Mayahuel at 12th & K, to open La Cosecha at Cesar Chavez park as early as the spring.

Inspired by a recent trip to Guadalajara, Delgado hopes to invigorate the plaza into a place where Sacramentans would think to meet for a date, a business meeting, or simply to hang out and grab a taco and a beer. “Most plazas in Mexico are the centers of the whole town and this is the center of Sacramento,” Delgado says. “I’d like to bring the hustle and bustle of Mexico [to the park], because in Mexico, everything happens at the plaza—everything!”...

La Cosecha - 'The Harvest'. Inspired, fresh and delicious selections in a casual yet artful atmosphere. This spring! pic.twitter.com/cuLLTPmc8I

Previously, the space housed Cafe Soleil, until it closed in Dec. 2014. The owners of Cafe Soleil have since opened a new restaurant - Soleil Mexican American Cuisine - at 2790 Stockton Blvd.

Beer Run: Sacramento area will be represented at S.F. Beer Week - We’re already starting to hear chatter about Sacramento Beer Week in late February, but first things first. San Francisco Beer Week is Jan. 22-31 and is well worth checking out. You’ll find great Bay Area beer at dozens of events. The well-organized website, sfbeerweek.org, lists many of them, including beer dinners, pairings, meet the brewers and more. The big opening gala is $80, features 100-plus breweries and is expected to sell out. More and more, you’re bound to encounter Sacramento-area craft breweries in the thick of things, telling their stories and getting their beers in the hands of new Bay Area consumers. Blair Anthony Robertson in the Sac Bee.

Pho Ru: Not just another pho joint - I bring this up because one of Sacramento’s newest Vietnamese restaurants does not try to be 100 percent “authentic.” For that reason, Pho Ru transcends expectations for what you’d get at another pho joint: stir-fried clams with black mushrooms and water chestnuts are scooped up with airy shrimp chips ($9.95); fresh spinach colors fried rice a vivid green ($9.95 with a whole hen); lemon-cured shrimp brighten up a refreshing cabbage slaw ($9.95). Yet Pho Ru is steadfastly the sort of place people say is “authentic” or “tastes like Vietnam.” Whether or not that’s true, I do not care. Janelle Bitker in Sac News & Review.

Folsom's Palladio loses one of its restaurants - A casual eatery at Folsom's Palladio at Broadstone has shut its doors. San Francisco Bay Cafe had its final day of business on Tuesday. Now, the restaurant's exterior sign has been removed, and the restaurant displays a notice that says "business is closed." The restaurant attributed the closure to retirement. Sonya Sorich in Sac Biz Journal.

There's a new place to get a burger in Rocklin - Cheeseburger fans have another option in Rocklin. Moo Moo's Burger Barn has opened at 2330 Sunset Blvd., the restaurant confirmed on its Facebook page. The eatery serves burgers, sandwiches, salads and breakfast items. It's the fourth location for Moo Moo's Burger Barn, which has two restaurants in Stockton and one in Lodi. Sonya Sorich in Sac Biz Journal.