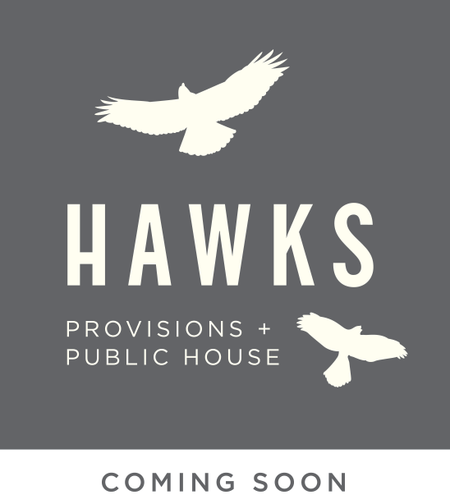 Hawks Provisions and Public House, the East Sac outpost for the critically-acclaimed Granite Bay restaurant Hawks, is expected to open in November in time for the holiday rush, reports the Sac Bee's Blair Anthony Robertson.

The restaurant was first announced in Feb. 2013, and the restaurant will finally open 30 months later. They had previously planned to open in Aug. 2014, March 2015 and now finally Nov. 2015.

In an interview with Hawks co-owner Michael Fagnoni, Robertson also reports that:

Read the entire Q and A  in the Sac Bee.

When it opens, Hawks Provisions and Public House will be located at 1525 Alhambra Blvd. and can be found online at http://hawksprovisionsandpublichouse.com/.

Beer Run: Now in Year 3, here’s how Bike Dog overachieved - The questions no one really seemed to be asking a couple of years ago, as the boom hit full stride, were, “Which of the newcomers would exceed expectations?” and “Which humble, little brewery would dial up good beer and dial in all the little things that add up to a pleasing beer-drinking experience?” The answer is Bike Dog Brewing. Blair Anthony Robertson in the Sac Bee.

Florida company wants a piece of Sacramento's craft beer scene - The Brass Tap, billed as an upscale craft beer and wine bar with food, recently entered California with a location in Vacaville. Peter Petrosian, the company's chief development officer, said he's eyeing Sacramento as The Brass Tap continues to expand throughout the state...Plans are still in the early stages. Petrosian is looking for local franchisees and hasn't finalized location details or a time frame for opening. But he thinks the region "can support multiple locations." Sonya Sorich in Sac Biz Journal.

The winner of the second annual Sacramento National Nachos Day Crawl - It actually started in the afternoon, 3 p.m., on Broadway at Maya's. A server delivered thoughtfully plated nachos—sour-cream zigzags, zesty grilled peppers, plus the requisite cheese and chips, beans, guacamole and such, for 9 bucks. This first offering had the crew philosophizing as to what makes a nacho. But that exploration was fleeting, and perhaps Adam's insight was sufficient: “When the cheese hits the chip...” Maya's wins the NND Crawl for the second straight year. Nick Miller in Sac News & Review. 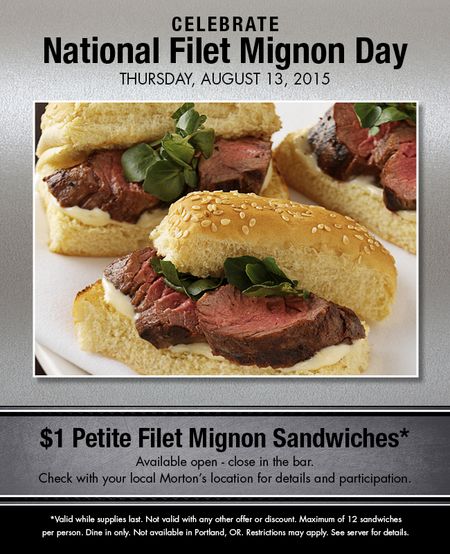 I remember when they used to give these away during happy hour. A much younger me used to grab a beer and a couple sandwiches for a cheap meal. But times change, and at $1, these are still a smoking deal.

That's also how I know these slider-sized sandwiches are delicious, especially for the price. Grab three or five, and you've got dinner. That's what I plan to do.

Morton's is located at 621 Capitol Mall, and can be found online at Mortons.com. 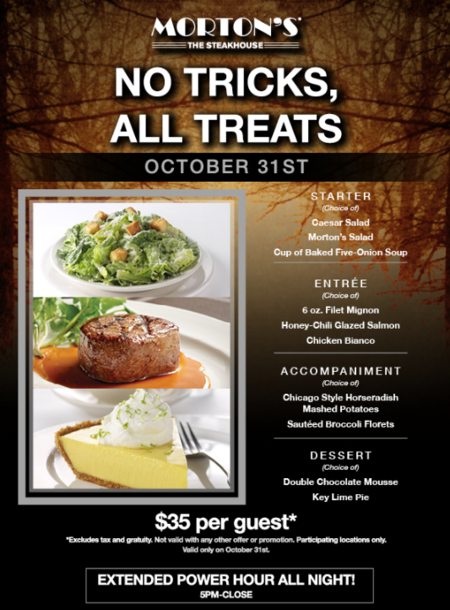 It's going to rain on Friday night, which will probably put a damper on your bar hopping for Halloween. If you're looking to do something different, consider this deal from Morton's.

For only $35, you can get a starter, an entree an dessert. At a steakhouse like Morton's, that's a steal. Click here for more information.

But if that's not your cup of tea, you can always hang out at their bar, where they have all night happy hour on Friday, Oct. 31. Click here for their happy hour menu.

Morton's is located at 621 Capitol Mall.

Burger & Wine at Morton's for $21 thru Sunday 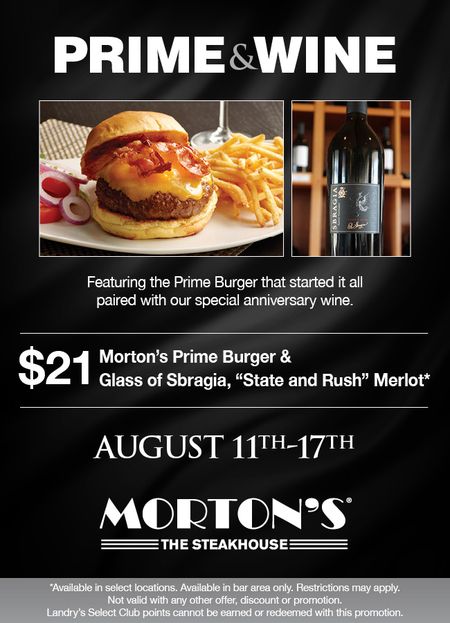 Sometimes you want to spoil yourself at a place like Morton's without having to take out a payday loan. Unfortunately, most days it's hard to get out of Morton's for less than $50 per person.

But not through Sunday.

For only $21, get a famous Morton's Prime Burger and a glass of Sbraiga "State & Rush" merlot through Aug. 17.

Not a bad way to get a glass of wine, a burger at Morton's for less than $30 with tax and tip.

Morton's is located at 621 Capitol Mall.

Dining News: Der Biergarten is 'A Great Spot to Grab a Beer' Midtown's Der Biergarten, has a small menu, but that doesn't keep it from being a great place to down a pint, says Sac News & Review's Jonathan Mendick.

I visited three times: a Saturday night, a Saturday afternoon and a Tuesday evening. Each time, the place was packed with a diverse crowd of talkative beer-drinking patrons having a good time.

On my first visit, I ordered a Derfinater Dog, a gussied-up hot dog which the menu bills as a “Frankfurter stuffed with Cheddar Cheese, wrapped in bacon, fried and served on a roll with our house made garlic sauce, mayo, cream cheese and BBQ Sauce.”

This may sound like something Guy Fieri would serve, but despite its seemingly excessive number of toppings, everything served a tasteful purpose. The mayo and garlic sauce helped moisten a somewhat dry roll. Likewise, the molten cheddar helped keep the frankfurter moist. The bacon added saltiness, which balanced the sweetness of cream cheese and barbecue sauce.

Because it opened in the winter, I've only had the chance to go once, and I loved the vibe of the place which had a passing resemblance to a trip to Oktoberfest in Germany last year. I haven't had the time to go back, but now that it's patio season in Sacramento, I can't wait to go back.

Der Biergarten is located at 24th & K streets, and can be found online at BeerGardenSacramento.com.

Davis-brewery Sudwerk thirsty to redefine itself and its craft lagers - It’s a scene that’s surely repeated at craft breweries throughout the nation – fans of good beer coming to the source to connect with the brewers, enjoy a pint or two with friends and spend time in a convivial setting. But for a time, it seemed Sudwerk, a regional pioneer in small-batch brewing, was going to miss out on this new era of craft-beer consciousness. While its beers were well-respected and made with precision, the brand itself seemed dated, if not overlooked. It had quality, but it was no longer cool. What’s more, it didn’t have an India pale ale, the hottest style category in the industry. Blair Anthony Robertson in the Sac Bee.

Poor Red’s owners get jail time, ordered to pay restitution - The husband-and-wife owners of Poor Red’s, a popular barbecue-and-bar fixture in the small community of El Dorado, have been sentenced to jail time in connection with multiple felony counts of state tax evasion and insurance fraud. Mark Glover in the Sac Bee.

Yolo Brewing Company will be coming to West Sac, with a targeted opening date of late Feb. 2014.

Yolo Brewing Company is a venture helmed by Mike Costello, whom people might remember as the owner of Brew It Up. Coyote Tap House now occupies the space at 14th & H.

The brewery will also feature "guest brewing services" and will have an "outdoor beer dock" for guests to enjoy their beer in a "casual, comfortable [and] shaded" environment, says its Facebook Page.

This is the second craft brewery to open in West Sac. Earlier this month, Bike Dog Brewery opened to packed crowds.

I reached out to Costello for an interview, but he said he was extremely busy this week. I'll keep readers updated as I learn more when Costello and I connect after Thanksgiving.

Yolo Brewing Company will be located at 1520 Terminal Street. You can find them online at http://yolobrew.com/, or on Facebook at https://www.facebook.com/yolobrew or Twitter, @YoloBrew.

Ford's Hamburgers - The building that used to house Ford’s Hamburgers in Land Park has been vacant for over a year. It’s been sitting empty and alone for quite awhile...She didn’t seem to have much information but she did inform me that “there will be Asian cuisine going in at the location” perhaps before the end of the year. Greg Brown in Valley Community News. (Second item.)

Very Mexican! - In sum, Oscar’s Very Mexican Food is the perfect sort of restaurant. It won’t break the bank, it’s easy to get to, it offers a steady and consistent menu that rarely disappoints. There’s now twice as much Oscar’s to go around for both Sacramentos, East and West. Viva Oscar’s! Joseph Atkins in Submerge Mag. 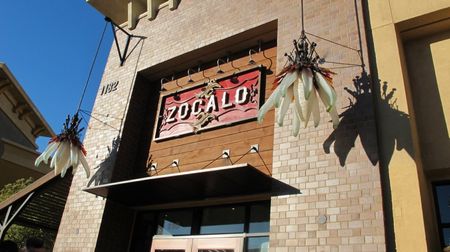 A late morning fire has closed the Zocalo's location at The Fountains in Roseville, per a press release issued by the Roseville Fire Department.

Roseville, CA-September 18th at 10:58 a.m. The Roseville Fire Department responded to a 911 call reporting smoke showing from the roof of a salon at the Fountains shopping center. Upon further investigation crews found there was an active structure fire in the attic of Zocalo Restaurant.

4 Fire Engines, 2 Ladder Trucks, and 2 Battalion Chiefs from the City of Roseville responded. Additional units from the Rocklin Fire Department responded including 1 Engine, 1 Truck and 1 Battalion Chief. Fire crews quickly extinguished the flames before any significant damage was done to the restaurant or building. The restaurant will be closed for an unknown amount of time while crews clean-up.

There were no injuries reported. The cause of the fire is undetermined at this time.

News 10's Paul James reports that "initial findings indicated the fire was accidental. investigators were looking into the possibility that the fire started in the wood fire stove of the restaurant."

I called the restaurant's Sacramento location Wednesday evening, and they say the Roseville location will be closed a couple more days to get the building back up to code. They hope to be open again by the weekend.

Get Your Nom On: Farm to Fork Week - Recently dubbed as America’s Farm-to-Fork Capital (Facebook, Twitter), Sacramento is leading the movement to bring more awareness on local food production and sustainability. The culinary community within the grid is a Locavore’s dream! To celebrate Sacramento’s growing culinary scene, and to further the mission of encouraging food sustainability, Farm to Fork Week will makes its debut! The celebration takes place September 20-29. Patrons will be able to experience why Sacramento is more than deserving of the title. Paola Baluyot on Girls on the Grid.

A Culinary Tour de Force in Sacramento - Sacramento is many things. An often testy political hotbed. A rich agricultural center. A place of torrid summers. But a powerhouse of destination-dining? Not so much. Enter Pajo Bruich, executive chef of Enotria Restaurant and Wine Bar in the Del Paso Heights neighborhood, who aims to change that. Carolyn Jung on FoodGal.com.