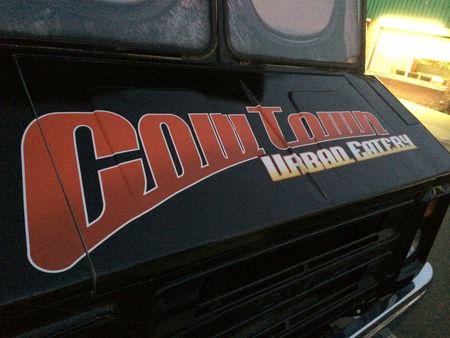 Owned by two brothers who are executive chefs at separate local restaurants, Cowtown Urban Eatery hit the streets for the first time this past weekend.

When I spotted the truck outside New Helvetia on Saturday evening, I'll admit I was intrugued mostly because we share a common name (but have no relation).

Luis Cruz was taking orders out front while his brother Victor was inside the truck, cooking.

In a short conversation after I ordered my food, Luis told me that while many things are still being worked out, the truck will feature global street foods. They hope to have a banh mi slider soon and bring in the cuisine of Mexico and Italy.

As I was talking to him, a bartender from New Helvetia came out to tell Luis, this was "one of the best fish tacos of all time."

They had a very simple menu on their first day, and I ordered a chipotle pork burger. Honestly, it was the best food truck burger I've ever had. I don't have a picture since I ordered it after dark, but the burger by the brothers Cruz featured a thin slice of apple and cilantro. 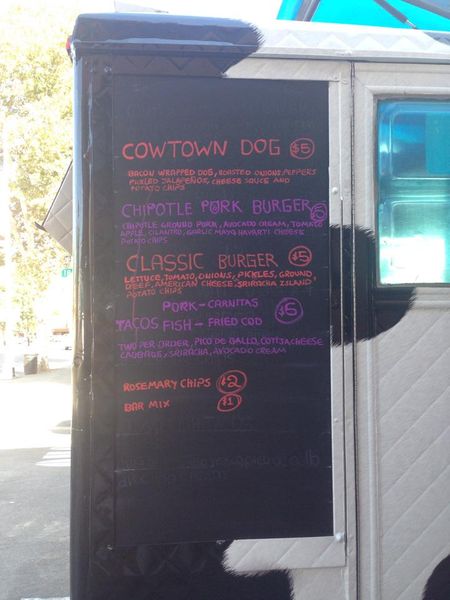 Eventually, they want to have two or three trucks with a test kitchen. They'd also like to branch out to make Web videos on how to make food and how the inside of a restaurant kitchen really works.

Because the novelty of food trucks has worn off, I don't seek out food trucks too often anymore. But given how astounded I was by their creative and excellent burger, I'll definitely check out what Cowtown Urban Eatery has in store the next time they're in my neck of the woods.

First Impressions: Wahoo's Fish Taco in midtown - The Maui onion rings were mundane, the Wahoo’s Bowl of teriyaki-sautéed carnitas was filling, the Kale Kai salad with chicken breast was disappointing. As for the signature fish tacos, we preferred the spicy one with “green sauce” and “citrus slaw” (tangy with lime juice and cilantro) over the grilled version, which had little flavor despite the “green sauce.” Question No. 2: Just what’s in the “green sauce”? Allen Pierleoni in the Sac Bee.

Counter Culture: Field House is a find among sports bars - We also jumped on onion rings (crunchy and airy) and hot and crisp French fries; a two-handed quarter-pound all-beef hot dog hidden under red, pickled Fresno chilies and relish; and a tasty chicken sandwich topped with crisp pepperoni coins, provolone cheese, roasted red pepper, arugula and lemon thyme aioli on a way-too-thick ciabatta roll. The three Baconater Sliders (as in “Terminator?”) are half ground beef and half ground bacon, with “sliced bacon, cheese sauce, Russian mayo and pickles.” “That’s a winner!” said Patrick. How could they not be? “This is gourmet bar food,” he said a little later, packing leftovers in a foam box. I agreed. Allen Pierleoni in the Sac Bee.

Casa Garden brings home lunch for a cause - If you like the idea of your lunch money helping both you and someone in need, then you have a number of options in the Sacramento area. In town, we have coffee shops and restaurants that benefit the homeless as well as victims of domestic violence or human trafficking. One lunch-spot-with-a-mission has been at it longer than most: Casa Garden Restaurant. Andrea Thompson in Sac Biz Journal.

Chef Keith Breedlove of Papa Dale's Diner food truck (no relation to chef Johnny Breedlove, now at Field House) is getting close to appearing on ABC reality cooking show The Taste 3, per his tweet last week.

I DM'ed him on twitter over the weekend asking him to elaborate, but he demurred, citing a non disclosure agreement. Using a little common sense, one doesn't get asked to sign a NDA unless there's *something* going on.

The concept of the show starts as a standard issue cooking show with four contestants who are alloted a certain amount of money. They can use the money each round to either buy an item or take away an item from an opponent, like a knife.

Guy's Grocery Games stars Northern California's own Guy Fieri. I've never watched the show, and per Wikipedia, the concept's not that straight forward. Read more about it here.

But for those of you who want to get a taste of him now, you can check him out on the Culi-Nerdy Corner on Good Day Sac.

Chef Breedlove's been on a roll recently. He also won took second at the professional chef's challenge at the State Fair, with Chef Cecil Rhodes of Bella Bru taking the top prize (via Good Day Sac's Tina Macuha.)

For those who want to try his food before he gets even more famous, find him at http://www.thedinertruck.com/, on Twitter, @PapaDalesDiner or at Facebook.com/PapaDalesMobile.

Sudwerk explores selling beer in cans for summer recreation - Sudwerk Brewing Co. on Tuesday used the services of Can Van to create pallets of canned beer. For years, the Davis brewery at 2001 Second St. has had its own bottling equipment, but for summer fun, Sudwerk is putting its California Dry Hop Lager into 12-ounce cans. Mark Anderson in Sac Biz Journal.

Pure, Organic, Love - The two women opened the Sun and Soil Juice Company in early June with only six part-time employees and a colorful menu of raw and organic juice and smoothie choices to offer Midtown Sacramento. In just one month, the Sun and Soil staff doubled and the demand for healthy and creative liquid nourishment is apparent in the company’s daily glass bottle returns, hundreds of pounds in weekly pulp weight, and its growing number of regular customers. “We had 75 bottles returned yesterday,” says Brown with a smile. “People are on board for recycling, reusing and cutting down on waste, which is good.” Steph Rodriguez in Submerge Mag. 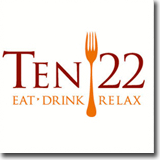