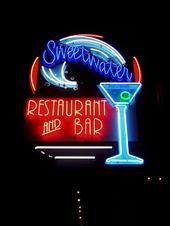 Sweetwater Restaurant & Bar moved to midtown from East Sac in August 2009, replacing Finns, a seafood restaurant. In that time, I've gone there for happy hour a few times and ate brunch there recently on a Groupon. I thought their happy hour food as solid, but their brunch left a lot to be desired.

Here are some more details bout the closing from the Sac Bee's Chris Macias:

"Business had been solid but the economic climate has changed," said Ross. "People rely on Groupons and happy hours. It's now a big part of our culture, but the profit margins haven't changed. Therefore, some other things have to change as well. People used to come in and spend $100 on the way home from work. That $100 doesn't exist very often now."

Ross, who co-owned Sweetwater with Tom Rockenbaugh, said there's no plans for now to re-open Sweetwater in a different spot.

So maybe I was their exact problem. I'm sad that they're gone and for those who have lost their jobs, but I'm hopeful that a new and vibrant (and better) restaurant will fill that spot.

PS: I want to add that I'm forever thankful that Sweetwater hosted the one charity event we did a couple years back. At that event, we raised $100 so a needy family could have gifts that Christmas. I wish their owners good luck in whatever their future holds.

Dining review: Old Sac's refined Firehouse has an edgy side, too - The Firehouse Restaurant, stately and refined as it may be, faces more challenges than any other eating establishment in the city. It has to live up to its lofty reputation – and overcome it. It has to be all the things it used to be – while keeping pace with the many wonderful restaurants that have burst onto the scene over the past decade...How is it doing? It's nailing it. Blair Anthony Robertson in the Sac Bee.