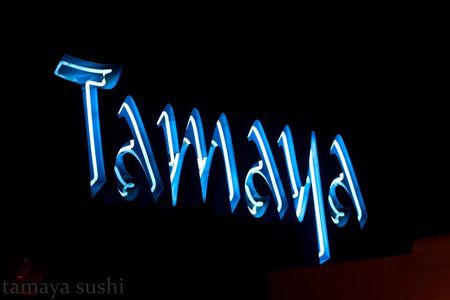 Tamaya Sushi, a restaurant that closed earlier this month after it lost its lease, was trashed the night before the space was to be returned to the owner, reports Bob Shallit in the Sac Bee.

On the night of Dec. 3, she said, somebody did “severe damage” to the place, pulling down ceilings, smashing toilets, cutting electrical wires, pouring concrete into drains and destroying mosaic tiles on walls and granite countertops. Air conditioning equipment also was removed.

Adding insult, soy sauce was poured all over the floors.

Building owners estimate that the damage will cost up to $500,000 to repair.

Grange slinging $50 burgers - First there was Ella’s $26 burger. It seemed outrageous at the time, and now, completely reasonable thanks to Grange’s $50 burger. Available only tonight through Sunday, this extravagant and decadent offering features generous truffle shavings, fat slices of seared foie gras, braised oxtail and a side of truffle fries. Chef Oliver Ridgeway shared the above photo on Instagram last night of the finished product. Janelle Bitker in Sac News & Review.

New-look midtown Sacramento bar has novel ‘give back’ strategy - Barwest, at 2724 J St., recently completed a complete remodel and revamped its menu. It also established what owner Trevor Shults is calling a “community table” – a designated booth at the back of the restaurant with an unusual feature. All profits from meals ordered at that table go to a designated charity – Shriners Hospital this month, Big Brothers Big Sisters in January, and others, changing each month, over the next year. Bob Shallit in the Sac Bee.

Chaat of India: Ignore the chef’s warning - Chaat of India opened earlier this year. Thanks to a smart lunch buffet and a thoughtful menu that features both classic Indian dishes that Americans have become accustomed to as well as numerous and likely unfamiliar chaats, the restaurant has quickly become a favorite among fans of Indian cuisine. Garrett McCord in Sac News & Review.

Meet the newest pizza restaurant entering the region - PizzaRev, which serves customized 11-inch pizzas ready in minutes, plans to make its local debut in 2016. Franchisee Harvind Uppal said he's opening a location in a retail center that's under construction at 5801 Folsom Blvd. in East Sacramento. The 1,800-square-foot store is expected to open by summer. Sonya Sorich in Sac Biz Journal.

The new bar is scheduled to be open Wednesday through Saturdays until 2 a.m. Most days, Rum Rok opens at 8 p.m., with an early opening on Fridays at 5 p.m.

Rum Rok's cocktail menu reads like a standard tiki bar's menu, featuring Mai Tais for $8 and Mojitos for $7. Most cocktails cost between $7 and $11.

They also feature classic cocktails such as an Old Fashion and French 75, both for $7. Click here to see the entire cocktail menu.

Good Day Sac reporter Cambi Brown Instagrammed a photo of the interior during a visit during their preview weekend.

* Corrected cross street in the title.

Cielito Lindo Mexican Gastronomy: From the ashes, excellence - Despite the building’s original purpose, this is no fast-food taqueria. Instead, Alarcon and his staff provide exceptional service and vibrant flavors where customers might normally expect less...Don’t let the casual interior confuse you. It belies the fine-dining quality of the service and food. Ann Martin Rolke in Sac News & Review.

New owners maintain tradition at Sacramento’s Fox & Goose - But Berkey and Monson won’t be chasing what’s new to try to keep up. Though they are not Daltons, they are part of the larger Fox & Goose family – especially Monson, who has worked there for 16 years compared with Berkey’s two. “We know who we are,” Monson said. “What makes Fox & Goose so great is people have a special (association): ‘I had my first beer there,’ or ‘I met my wife there.’ ” Monson and Berkey said they plan to make improvements, but in a subtle manner Fox & Goose management always has favored, so as not to startle the natives. Carla Meyer in the Sac Bee.

Update on former Downtown Plaza businesses, plus new Milagro photos - After checking out Downtown Plaza's sad remnants, we couldn't help but wonder about the status of two former tenants: River City Brewing Co. and Spinners bakery. Despite shutting their doors in Downtown Plaza, the businesses found new locations and once planned to open by the end of the year. Actually, both places once expected to open by early September. Sonya Sorich in Sac Biz Journal.

Meet the couple behind and in front of Formoli’s Bistro - For its first four years, Formoli was located in a considerably smaller space at 33rd and J Streets, five blocks west from its current location. Then it literally swapped sites with Gonul’s, which featured Mediterranean cuisine. “The thing that I find curious,” Formoli tells me one recent morning in the restaurant, “is that when we were in the smaller space we were more of a destination restaurant. We’re doing very well here but we’ve noticed that most of our customers are from here in East Sac.” Ed Goldman in Sac Biz Journal.

B-Side - Don’t expect to see a cocktail list at B-Side; instead mixed drinks are ordered dive bar-style through word of mouth with the lounge’s expert bartenders. Though the bar itself won’t serve food, B-Side is expecting to host a variety of food trucks every day of the week. In Sactown Mag.

Bob Simpson is a busy man.

In addition to being one of the men behind the new Malt & Mash Irish bar coming to 7th & K, he's also the driving force behind Rum Rok, a new tiki bar coming to 15th & H, reports Ben van der Meer in Sac Biz.

But on a larger scale, Simpson said, he’s wants Rum Rok to be part of a Memorial Auditorium district of nightlife around the much-used edifice on J Street. In addition to Republic, there are plans for a new old-style beer hall concept at a former nightclub near the corner of J and 16th. There's also new housing in the works in three spots farther north on J, as well as at I and 15th streets. And a neighboring building to 805 15th, owned by the state, could become a state welcome center tied to the Governor’s Mansion on the same square block.

On its Web site, Rum Rok says it will have "drinks that will take you away. Tiki with 'tude. Rum Rok will bring you that tropical experience that will be like no other in Sacramento."

None of the previous night clubs at that location have been my scene. I'm excited to see what Simpson does with a tiki bar concept.

Twelve Rounds Brewing opened on Saturday in East Sac - “We’ll only have a couple of beers on tap, a pale ale and a Hefeweizen,” said Dan Murphy. “We’ve got more beers fermenting. We’ve got an IPA fermenting and this week we’re going to be making a stout.” In the months ahead, Twelve Rounds will also start a barrel-aging program. The plan is to have 12 beers on tap, as in Twelve Rounds. Blair Anthony Robertson in the Sac Bee.

Feast Q&A: Ryan Dye, founder of Midtown Jerky Co. - Taking a relatively minuscule piece of the jerky market is Ryan Dye, who started Midtown Jerky Co. of Sacramento two years ago. His three flavors are sold in 3.25-ounce foil packages with an image of the Tower Bridge ($7 to $8). The company’s motto: “Freshness plus quality equals awesome.” “You really don’t need a hook to set yourself apart,” said Dye, 33, who previously worked in restaurant management. “You just need to do something better than everybody else.” Allen Pierleoni in the Sac Bee.

Southern and comfortable: Sarom’s Southern Kitchen - Overall, it’s best to stick to Sarom’s Southern food—especially the fried chicken and jambalaya. Though the other American dishes we tried might offer plenty of comfort for those who need it, they just didn’t have the technical flair or soulfulness of these two standout Southern staples. Jonathan Mendick in Sac News & Review.

Five things to know about Carmichael's Milagro Centre - What about The Rind? There was once speculation that The Rind, midtown Sacramento's artisan cheese-focused bar, would open a Milagro Centre location. It appears that won't happen. Sonya Sorich in the Sac Biz Journal.

Get your caffeine fix: Two new coffee shops to open soon - Good news for local caffeine addicts: Two additions to the local coffee scene plan to open in upcoming weeks. Temple Coffee's Davis location will hold its grand opening on Aug. 15. The store at 239 G St. is the fourth retail location for the locally owned company. Temple also has a store in the works at 22nd and K streets in midtown Sacramento. Sonya Sorich in Sac Biz Journal.