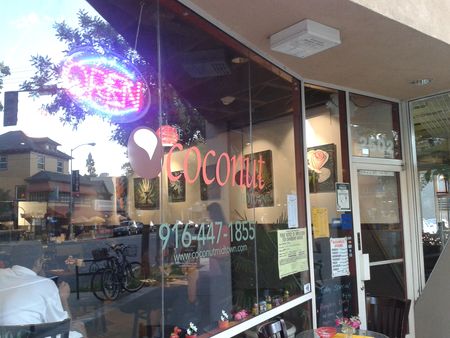 The Coconut Thai restaurant was closed for more than a week by county health inspectors as a result of multiple failed inspections that found "vermin and animal contamination" violations.

County of Sacramento health inspectors first closed the restaurant on Thursday, Nov. 12 for multiple violations, including vermin and animal contamination. It reinspected the restaurant on Friday, Nov. 13, and continued to find vermin and animal contamination.  (Note: I would link to the actual reports, but it appears that the county's Web site displaying these documents is down and has been broken for the last several days.)

This is the second high profile restaurant to be closed by health officials in the last month. Earlier this week, Cowtown Eats wrote about a downtown La Bou location that was forced to close for a day.

The Coconut has been lauded by critics for its bold flavors. Here's a snippet from Garrett McCord's January 2014 review in Sac News & Review:

Cream-cheese wontons aren’t the epitome of culinary Southeast Asian traditions, but damn it if they aren’t delightful. Soft cream cheese and chives in a crispy wrapper and served with a sweet chili sauce? There is nothing wrong with that, and The Coconut recognizes this...

As with other restaurants that have faced similar sanctions by the health department, I'll likely eat there again. In fact, since La Bou was closed last week, I've eaten there twice for lunch.

The Coconut is located at 2502 J Street, and can be found online at http://www.coconutmidtown.com/.

Lucky Irish: Almost Famous Irish Coffee, de Vere's Irish Pub - Although it's not the year-round chill chaser needed in San Francisco, the Almost Famous Irish Coffee ($8) from de Vere's is available in summer and, blissfully, winter. Start with a custom coffee blend, lace it liberally with Tullamore Dew Irish Whiskey and top it with freshly whipped cream. The only dilemma is when to order it. Ann Martin Rolke in Sac News & Review.

New dining option in El Dorado Hills Town Center - There's good news for diners at the El Dorado Hills Town Center, which has seen two eateries depart in recent months. Milestone Restaurant opened in the center on Sunday, filling an approximately 3,400-square-foot space across from Bistro 33. The space was previously occupied by Cafe Campanile, which rebranded itself earlier this year and moved to a smaller location in the center. Sonya Sorich in Sac Biz Journal.

Uber-style restaurant app catching on in Sacramento area - A Sacramento startup with an Uber-like app is raking in new customers and closing in on a big venture capital deal – thanks to a recent tweak in its business plan. The company, Requested, was launched in March with what its founders thought was a killer smartphone app for the dining industry. Bob Shallit in the Sac Bee. 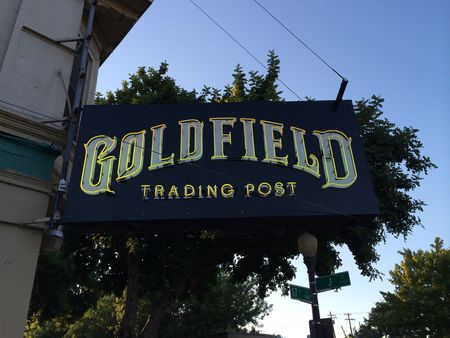 Goldfield Trading Post was closed for three days due to a rodent infestation, reports Marin Austin on FOX 40.

Last Friday, officials with the county Environmental Management Department shut down the saloon-style restaurant after reportedly finding a dead rodent on the floor next to the ATM machine, seven rodent droppings on top of boxes of sugar and salt, 10 droppings beneath beer taps and two dead cockroaches beneath beer taps...

"Rodents entered our [venue] after our landlord opened up the walls to do work on the second floor of the building. [We have since] fixed the problem by patching the walls so there are more no entry points for rodents," Bair said.

According to the Sacramento County's Food Facility Inspection Web site, Goldfield was closed after it failed an inspection on Friday, Oct. 2. Among the findings were:

The restaurant was reinspected the following day and failed again, per county reports.

The restaurant was again inspected on Monday, Oct. 5 and passed. "No evidence of an active vermin infestation was found," said the report.

Honestly, it's not unusual to have restaurants closed due to vermin infestation. Obviously, you'd prefer that they not happen, but it happens to both good restaurants more often than you think. I've eaten at Goldfield, and despite their temporary closure, I'll eat and drink there again.

Goldfield is located at 1630 J Street, and can be found online at http://goldfieldtradingpost.com/.

Chef Scott Ostrander leaves Paragary’s - Scott Ostrander, who helped reopen Sacramento’s Paragary’s restaurant in after its $1 million makeover, has left the restaurant. Ostrander has taken a new job as executive chef for reservation-only dining events at the Inn at Park Winters, a resort in rural Yolo County. Carla Meyer in the Sac Bee.

What to expect from Sacramento's coffee week - Here's an excuse to ramp up your standard caffeine jolt this afternoon. Sacramento's Specialty Coffee Week kicks off today and will run through Oct. 18. Some locally owned businesses will offer special items all week. You can also expect a variety of unique events held daily. Sonya Sorich in Sac Biz Journal.

Five buzzworthy events to check out during Specialty Coffee Week - From tutorials on how to brew the best cup at home to a three-course meal paired with coffee, and a java-centric barista competition, here are five ways to celebrate Sacramento’s caffeine craze during the second annual Specialty Coffee Week. Gregory Allen and Jessica Rine in Sac Biz Journal.

Specialty Coffee Week 2015 Guide - As America’s farm-to-fork capital, Sacramento’s affection for quality coffee comes as no surprise. Specialty coffee attempts to celebrate farmers across the world and their tireless efforts to grow delicious and sustainable coffee. For the second year, Sacramento has set aside a week to celebrate coffee’s journey from farm to cup with a myriad of educational opportunities. We’ve collected a slice of the happenings so that you can celebrate Specialty Coffee Week and stay caffeinated all week long. A.C. Scott on City Scout Mag.