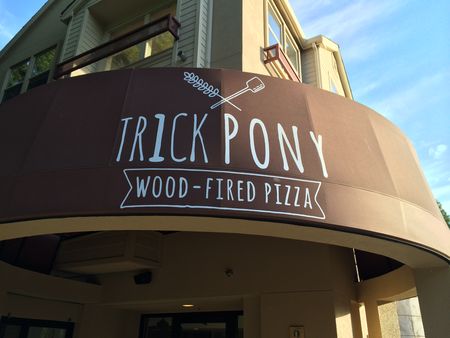 Last week, I ran into Chris Jarosz of Team Broderick passing by Capital Dime (one of their restaurants) and got a few updates from him. First on Piccola Citta, the restaurant replacing the recently-shuttered Trick Pony.

I have a ton of respect for Team Broderick and I look forward to trying their new restaurants.

Chocolate rain - Just in time to ruin all of our so-called summer swimsuit bodies before they even take shape, the first ever Old Sacramento Chocolate Week starts this Monday, May 4, and lasts through Sunday, May 10. Jonathan Mendick in Sac News & Review.

VIDEO: Crafting turtles from caramel and chocolate - It’s all things chocolate during Chocolate Week in old Sacramento Monday. On KCRA.

Sac Bee restaurant critic Blair Anthony Robertson has found another restaurant to put into the highest tier of restaurants in the Sacramento region - Carpe Vino in Auburn.

But here’s a chef, so talented and committed to his craft, whose name really should be on the tip of every serious epicurean’s tongue. And the restaurant itself – a breeze to enjoy as a drop-by spot for a glass of wine and a snack or for an involved multicourse dinner – deserves to be considered right up there among the handful of the best in the region...

When it comes to farm-to-fork dining, Alexander and Carpe Vino are leaders.

Alexander’s way of expressing ingredients both familiar and esoteric, his preference for complementary and contrasting textures, his sense of color and balance on the plate, his notion to both reassure and challenge the palate, and, more than anything, his ability to build layer upon layer of flavor using time-honored techniques, are apparent throughout his repertoire.

Robertson, who has a reputation among restaurant owners for throwing stars around like they were manhole covers, was critical of the noise issue in the main dining room during the height of service...yet the weight of all of the other quality factors compelled him to award the maximum rating.

The review (click here) quite reasonably focused on the food, but our entire crew, front and back of house, get an equal share of the responsibility for all that we do.  There is no question in my mind, that pound-for-pound, Carpe Vino’s staff is champion caliber and competitive with the big boys in Midtown. . .and beyond.

I wrote about my visit to Carpe Vino last month, raving about the prix fixe meal I had during the Winter Olympics. I completely agree with Robertson about the mastery of the chef's cooking and the value the restaurant brings with its wines at retail prices. I only wish it were a little closer.

Carpe Vino is located at 1568 Lincoln Way, Auburn and can be found online at https://www.carpevinoauburn.com/

First Bite: Blackbird Kitchen & Beer Gallery -  I was happy to see that Lampkin’s trademark “Captain’s Chowder” has remained on the new menu—creamy and satisfying, and chock-full of Pollock, squid, mussels and clams, this dish alone is worth a visit. Another appealing menu item was the salmon toro, prettily arranged on a plate with an array of lively pickled vegetables and flower petals. Kira O'Donnell in Sac Mag. 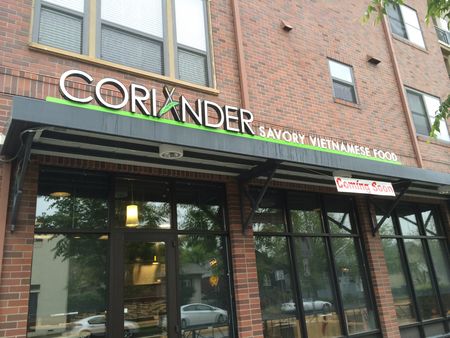 Coriander Savory Vietnamese Food, which replaces Midtown Deli at Alhambra Blvd and S Street, will open on April 24 at 4 p.m., it announced on its Facebook page.

On its Web site, this is how Coriander describes its concept:

Vietnamese food has become more mainstream and desirable over the years due to the fact that it's light, healthy, yet tasty and hearty. Traditional Vietnamese dishes have garnered praises from today's food lovers for its fresh ingredients, minimal use of oil and abundant use of fresh herbs and vegetables such as lemongrass, ginger, garlic, coriander and mints. With the balance of fresh herbs, meats and selective spices, Vietnamese food is considered one of the healthiest worldwide.

The Vietnamese Coriander (Rau Ram) is a fresh herb commonly used in Vietnamese cuisine. It can be found as a beautiful garnish or paired with other herbs to enhance the flavor of a traditional dish.

Our food stem mostly from central Vietnam which is a little more spicy than northern or southern Vietnam. From grilled meat served over rice noodles and fresh herbs to delicious savory noodle soups that have been simmered for hours, all of our menu items have been family favorites over the years.

At Coriander restaurant, diners will enjoy savory Vietnamese appetizers and entrees in a clean and modern environment without compromising quality, taste, and service.

I stopped by over the weekend, and it looked like the place has was still a work in progress, but it was taking shape. If memory serves, the counter was installed, along with a lot of the flooring.

It reminded me of Wayside Noodles in Natomas inasmuch as it looked like a fast casual restaurant setup.

Efforts to reach the owner via phone and e-mail over the last few weeks for more information have been unsuccessful.

I'll keep you updated as I learn more.

Coriander is located at 1899 Alhambra Blvd. and can be found online at SavoryCoriander.com.

Davis startup RezKu has no reservations about challenging OpenTable - The monitor – with keyboard and wireless mouse – was part of a new online reservations and table-management system from Davis-based startup RezKu, which launched in February. The system had been installed at the newly renovated Crawdad’s the day before. Crawdad’s 2.0 would have a soft opening that night and debut the next day, so RezKu’s Paul Katsch and Senica Gonzalez were going over any last-minute details with Crawdad’s co-owner Trevor Shults....With RezKu, Shults’ front-of-house team can manage online and phone reservations, arrange tables, assign servers, take notes on guests’ personal preferences (a customizable feature that lists food allergies, wine preferences and the like), check wait-lists and table-turnover times, and more. RezKu also offers an optional text-messaging system that confirms guests’ reservations and notifies them that their tables are ready if they’re waiting after they arrive. Allen Pierleoni in the Sac Bee.

Knee Deep scores big at Bistro IPA Festival - At Sunday’s 17th annual festival, Knee Deep Brewing, which recently celebrated its grand opening at its new 18,000-square-foot facility in Auburn, won first place with its Citra IPA in both overall and the People’s Choice category. It’s the first time that has happened. Blair Anthony Robertson in the Sac Bee. 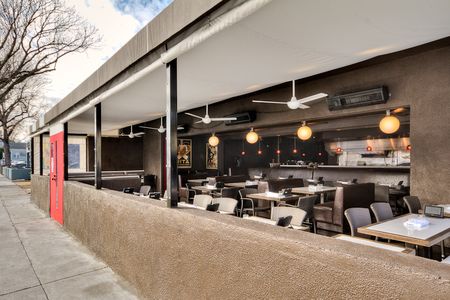 Cafe Plan B, which opened at the end of February at 20th & Capitol (next to Jack's Urban Eats), got its first visit from a major critic - Sac Mag's Kira O'Donnell.

But the most unusual aspect of the restaurant is its lack of traditional waitstaff – patrons simply select their meal (including beverages) from a Presto touchscreen tablet located on their table (which, by the way, offers games to play if you’re feeling bored). Standout menu items from my visit included ethereal, doll-sized raviolis stuffed with Compté cheese and drizzled with crème fraiche; a dazzling butter lettuce salad embellished with toasted walnuts, Roquefort cheese and sun-dried cherries; and a velvety, elegant crème brûlée.

Ally Gaffan on A Girl & Her Fork also paid Cafe Plan B a visit.

I've always felt a great dining experience can mainly be gauged by three things- a relaxing atmosphere, friendly and efficient service and delicious food. When my friend Misa and I stopped in on Friday, Plan B Café delivered strong on all three counts. The owners of the new bistro have really spruced the place up.

Read the entire post on A Girl & Her Fork.

I've eaten there once - during the week of their soft opening, and loved the place. It's a little pricey, but still a good value for your meal. I also appreciate their tablet-based ordering system. Between ordering the food when you were ready and paying for it right away, I feel like it shaved 7 to 10 minutes off my lunch visit, which is crucial if you're on a tight schedule.

One of my co-workers at there this week and came back raving about the food. I can't wait to give it another try.

Pete’s Restaurant & Brewhouse: Pizza, Burgers and Beer, Oh My! - The Pete’s Chicken Combo with bacon, red onions and artichoke hearts was ridiculously addicting, and the thick dough was just hearty enough to stand up to the pizza’s creamy garlic sauce. Adding a dash of crushed red pepper flakes didn’t hurt either. Jennifer Resnicke in Style Mag.

More burgers coming to Sacramento? - Another fast-food franchise is eyeing the Sacramento market. Checkers Drive-In Restaurants Inc., which operates nearly 800 Checkers and Rally's locations nationwide, wants to have three to five restaurants in the Sacramento region by 2015. And within the next five years, the burger chain hopes to have 15 to 25 locations here. Sonya Sorich in Sac Biz Journal. 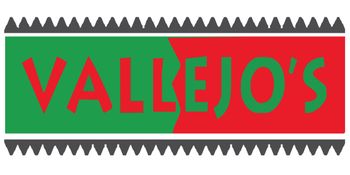 The Legislature's on Spring Break this week, which means many of you who do business in or around the State Capitol have a little free time over the next couple days. For Legislative types, I suspect for many, that time gets filled with a couple extra drinks. If you're going to do that, why not do it fro 2/3rds off?

If you work downtown, you've probably eaten at Vallejo's Mexican Food. They're a solid option for lunch, and an onverlooked option for dinner. Here's your opportunity to eat there half off. 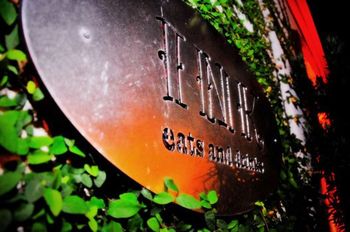 I've been on a brunch kick recently, but it's hard finding good deals that include brunch. Luckily, Ink Eats & Drinks has a half off deal that lets me eat my weekend midmorning meal on the cheap. (Click here for happy hour info.)